Performance Image for “Broadway’s Other Steves”

Cover art for “Broadway’s Other Steves” performance at ACFL&MH

I recently designed the image for the Andrew Carnegie Free Library & Music Hall’s annual benefit performance, and once again recycled a tried and true vector image I’d created of the ACFL&MH’s stage and proscenium. When something works, why change it? I’m glad I took the time when I first created this art to create it in Illustrator as a vector file so it would be flexible because I’ve used it from invitations to posters. This time I didn’t use the entire width of the stage art. It would be too small to be of interest on a vertical invitation, and I liked the tension of it being truncated off the right edge, as if there is something just out of sight.

Broadway’s Other Steves…via Pittsburgh, is a revue of hit songs from musicals written by Broadway composers Steven Flaherty and Steven Schwartz, who both have ties to the Pittsburgh area (the “other Steve” is Stephen Sondheim). We don’t always know the composer’s names but we do know the shows they created, so the show titles were the first draw. Below is a graphic I’d created for the newsletter in the spring to announce the show, and this was our first idea for the performance image, in color of course.

The initial idea from the newsletter.

But we’d used a similar marquee for last year’s benefit and this didn’t pose a lot of opportunity for color. I cast around for another way to display the titles of the show and the show’s information, and came back to the proscenium as a simple, eye-catching element. Below is the original use of the proscenium on a post card, then the second use on an invitation and program for another performance for Stage 62.

It may look like any other traditional stage, but to those of us who know the Andrew Carnegie Free Library Music Hall it is actually a simplified illustration of the stage and proscenium. The arch, the lights, the bowed stage, the curtains, are all what you see when a show is about to begin, and if you’re standing in the back, you see these silhouetted heads of people too.

Below is the first iteration of this theme, designed for a debate held in October 2008. It’s a different color theme, and it’s also got a few extra elements in the two podiums, flags and bunting along the stage. I photographed this hall for years prior to this program and decided we needed to have this vector art for this program, and to be used for future programs and promotions for the Music Hall.

Vector simply means a shape has reference points that when connected create defined edges. These can be filled with color and pattern, and can be enlarged infinitely without losing definition, so all the work of digitally drawing each shape could be reused in various colors and various sizes. I actually chose one of my photographs from a program where the Hall was nearly full and drew on top of it with the digital tools in my graphics program instead of my pens to create the simple shapes and planes of color. I drew one side of the proscenium and stage, then copied it and flipped it horizontally, pasting it next to the first section to be absolutely certain the shape of the proscenium was symmetrical as well as the fall of the curtains. And I followed the outlines of the the profiles of the people in the crowd that to this day I still recognize some of them!

The original art with no text.

For the debate, I imagined how the stage would be decorated for the debate and added the podiums, bunting and flags.

Below is the invitation to the Stage 62 50th Anniversary Benefit and their performance of Merrily We Roll Along in concert. Usually the program I design for a show is derived from the art we used for the invitation or post card, but in this case the program had much more to say than “come to the show”.

And the artwork for the invitation has a history of its own so I thought I’d feature it—in fact, I stole it, from myself. It’s just called recycling your own designs. Below is what the proscenium looked like during the debate. 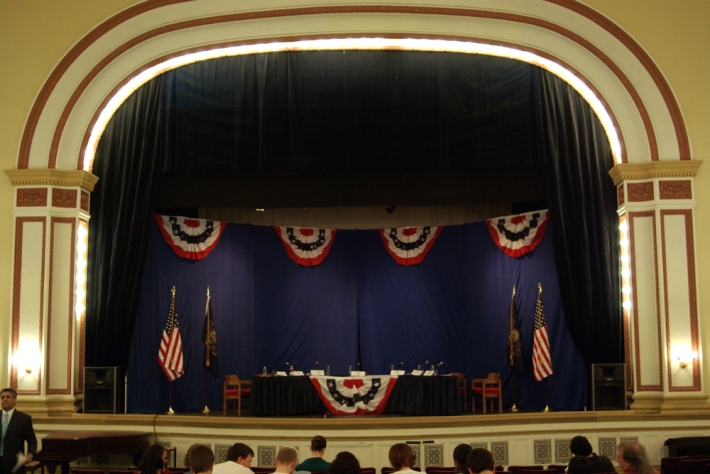 The stage ready for the debate. 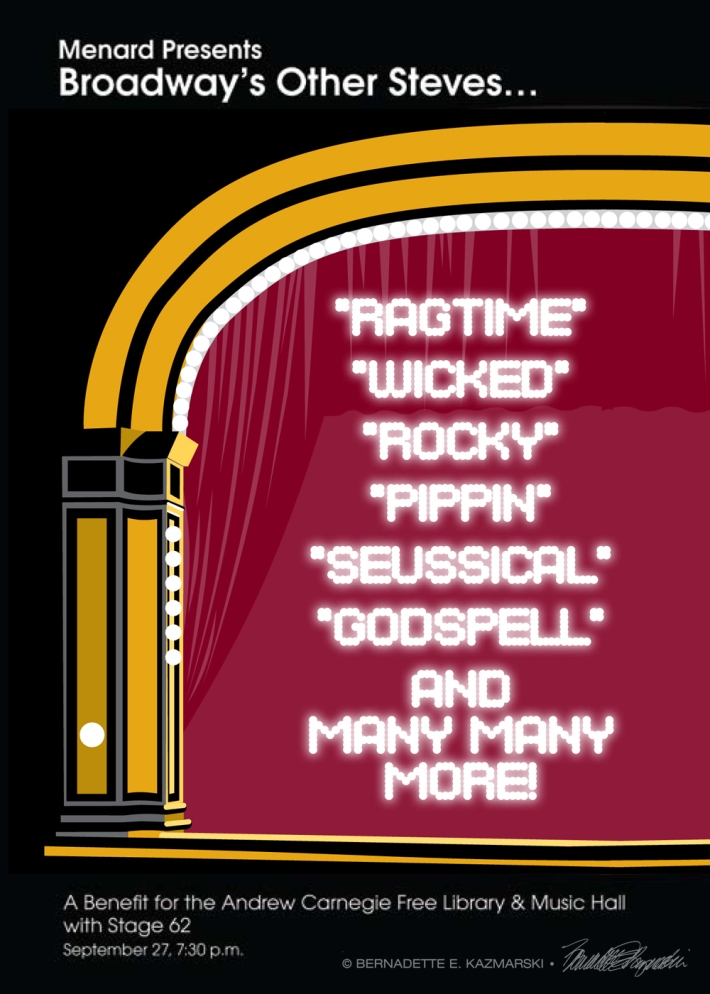 Casting about I decided what was needed was a color complement, rather than two colors in the same family, and even though a blue curtain isn’t typical, who cares? It works visually, and this is a stage where everything is imaginary anyway!

Cover art for “Broadway’s Other Steves” performance at ACFL&MH

For ore information about the Library & Music Hall you can visit the website at http://www.carnegiecarnegie.org/ and visit the performance page to read about the benefit performance.