2012 still recognizes the sesquicentennial, or the 150th anniversary, of the Civil War; last year was the beginning of the war, this year and the next two follow the history of battles and hardships.

Andrew Carnegie Free Library & Music Hall will be hosting a “living history” event in both the Library and Music Hall and at Carnegie Park including tours of the Capt. Thos. Espy Post, speakers and vendors, a Victorian Tea and a Civil War-era Fashion Show as well as reenactments of skirmishes and Civil War era baseball, yes, really. Visit the ACFL&MH website for the full itinerary.

This post card is the invitation to the event. For these post cards that will not only be mailed far and wide but will be distributed in displays far and wide, we’ve decided to go with the larger post cards, 5.5″ x 8.5″ and using photos from last year’s event at Carnegie Park and the Library & Music Hall. For last year’s post card I used images I photographed at previous Civil War events only at ACFL&MH.

The main image, “Skirmish”, is from the Fredericksburg skirmish in the afternoon in Carnegie Park including the 9th Pennsylvania Reserves. Quite dramatic to witness from the time the troops organized and marched into positions to actually watching the event; I was struck by the bright innocent green of spring and even the lilacs blooming behind them, and the act of battle in the middle of all this new life. In all these photos there are a few anomalies that I removed if possible; in this one was a big old wooden utility pole right smack in the middle, I just couldn’t leave it there.

"Skirmish", the Fredericksburg skirmish reenactment from 2011 at Carnegie Park.

The other shots are a mix of candids, posed and detail shots from previous years. I chose the ones that showed a balance of activities, and might be considered fairly unique to most people’s experience.

Cooking in the camp in Carnegie Park; this woman wore jogging shoes so I lengthened her skirt and a plastic butterfly clip in her hair, and in the background were cars, people in modern clothing, cinder block buildings and even a few houses.

Ladies in Dresses; I had met these three while at the Library & Music Hall and was glad to see them again in the Park even though the concrete around them wasn't really authentic. There were cars in the background and people in modern clothes that had to be removed; you can see some of the modifications, but I didn't need the entire background for the post card. 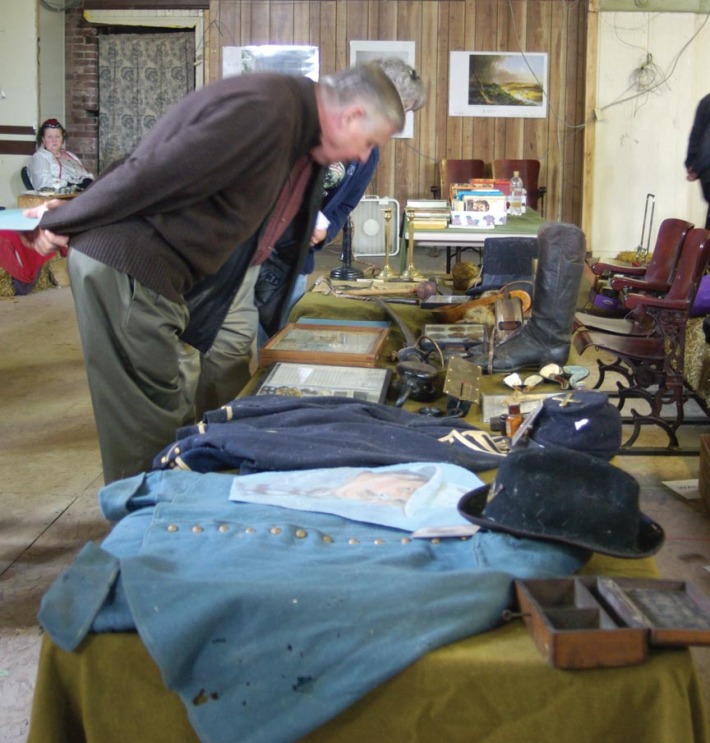 The vendors and sutlers were set up in what is now The Studio in the basement of the Library & Music Hall.

The Pittsburgh Franklins play Civil War-era baseball; of course the chain-link fence is not authentic, but removing it from the photo was going a bit too far...

I’ve been making ladies’ accessories for reenactors and I’ll also have something else to offer this year. I’ve been photographing this event since 2006 and have a number of photos I really like, plus I’ve done field sketches and I have a few watercolors planned as well. Photographer friend Rick D’Loss and I will have a combined show in the Reception Hall that day of photos, paintings and sketches from previous reenactment events hosted by the Library & Music Hall. I know for certain that one of my photos will be the one of the skirmish on the front of the post card.

And in closing, the back of the post card with just the hint of an image screened in the background, the corps flag of the 9th Pennsylvania transparent enough that it won’t interfere with mailing information, and one of the original photos of the Espy Post from the post catalog and collection of artifacts.

You might actually be able to see the schedule here.