Sold “Autumn in the Valley” 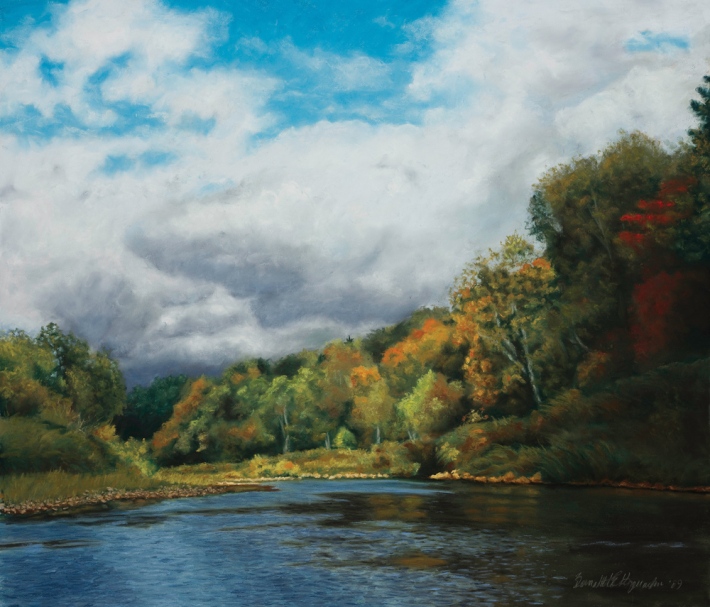 I don’t sell my bigger paintings very often; they take me longer to paint simply because they are larger and often very detailed (interesting how the level of detail often increases with size), they are more expensive, they are difficult to find a place to display because they are large and heavy and the recipient has to have an equally large space to display them. So it’s exciting when one of them does finally sell.

And very gratifying when it’s purchased by someone you know, and it ends up in a great place. We all want the things we create to go to a good home where our work will be appreciated.

In this case, I know the person who purchased “Autumn in the Valley” and while I know he appreciates scenes like that—we’ve gone canoeing on Chartiers Creek together—I had no idea he had interest in purchasing art, especially a piece this large.

“Autumn in the Valley” has been hanging in Fidelity Bank in Carnegie for perhaps the past year, in a wonderful little alcove that looked as if it was made for it. The scene of the painting is less than a mile away down the creek (as the crow flies, not as the creek flows), and many people who bank there are familiar with it or at least with the creek. Many other people, as they did in other places the painting hung, identified the water and hills and sky as their favorite canoeing/kayaking/fishing/walking spot, naming rivers all over the United States. I do want people to know that it’s my favorite creek, but I also enjoy when people find in one of my works one of their own favorite spots and they feel a part of the work.

So this was where the work had been seen. As we discussed the area on the creek where the scene exists and other activities along the creek, he considered his purchase. He ultimately decided it was too big for his house—framed it is 40″ x 36″—but he was still interested in purchasing because he had an idea. He’d purchase it and donate it to Andrew Carnegie Free Library & Music Hall where visitors could enjoy a painting of one of the valley’s beautiful places.

Could I ask for anything better for one of my favorite paintings, purchased by someone who truly loves it, and hanging forever in one of my favorite places? Don’t think so. I’ll be making a new plaque for the frame that includes the name of the purchaser/donor.

And thanks to all my friends at Fidelity Bank for answering customers’ questions and ultimately making the sale for me. What other bank does that for its customers?!

And I’ve already hung the next piece in the same spot, not as grand, but local and familiar.

Here’s the story of “Autumn in the Valley”:

Sloping hills blaze with autumn color at a rocky, rippled bend in Chartiers Creek, yet on the horizon deep gray-purple clouds hover; although the day was sunny I remember it being distinctly chilly with a sharpness to the breeze, especially on the water in a canoe, and winter is literally on the horizon.

For two reasons the scene was reminiscent and inspiring: first, that I rounded the bend to see this natural splendor in all its detail, brilliant color, fluttering leaves, rippling water, changing clouds, happening all on its own with no help from me or any other human; and, second, it was an example of that “change of season” with the gray-purple clouds of winter arriving on the horizon, two seasons blending into one another. I needed to share this image, and it was so moving that the inspiration also became a poem, and the title for my third annual poetry reading and art show at Andrew Carnegie Free Library & Music Hall, Change of Season.

No, I couldn’t paint while paddling, and my little digital photos didn’t do the scene justice, yet other than wading down the creek and setting up an easel in the middle of the water, there was no other way of painting this. To take the scene from the tiny digital image to the full-size painting took a good bit of memory and visualization; it’s a good thing I’m very familiar with scenes like this.

“I have travelled a good deal in Concord,” said Henry David Thoreau in Walden, his paradox of exploring a small town and its surroundings teaching him as much about human life and the interactions of nature as if he had traveled rare and exotic places about the globe.

I’d love to paint faraway exotic places, but in the interests of time I stay close to home for my hiking, bicycling, canoeing, walking and painting excursions, that being the valley where the Lower Chartiers Creek flows.

I’ve seen some exquisite sights on my adventures, and committed them to various media. The most moving are the ones I’ve chosen to paint large and in detail so that I might convey at least a portion of the grandeur that moved me beyond awe to action, sharing the places right around us though most people would never see them. Thus was born the series offering an image indicative of the watershed in each season.

“Art of the Watershed” has not only been a part of mypoetry readings from the very first, but as I created each of these paintings in the month of January they also inspired the theme of my reading.

2007: Paths I Have Walked
Signature painting: Dusk in the Woods

2009: Change of Season
Signature painting: Autumn in the Valley

2010: Coming Spring
Signature painting: Spring Comes to a Bend in the Creek