I just had to use that word in the headline. Quick—what does it mean?

It means it’s the 150th anniversary of the beginning of the Civil War. Andrew Carnegie Free Library & Music Hall will be hosting a “living history” event in both the Library and Music Hall and at Carnegie Park including tours of the Capt. Thos. Espy Post, speakers and vendors, a Victorian Tea and a Civil War Ball as well as reenactments of the Gettysburg and Fredericksburg skirmishes and Civil War era baseball (no, I didn’t know either).

This post card is the invitation to the event. For these post cards that will not only be mailed far and wide but will be distributed in displays far and wide, we’ve decided to go with the larger post cards, 5.5″ x 8.5″ on 14 pt. C1S and an aqueous coating on the front so that scuffs and fingerprints don’t obscure the images, and the card weight helps to keep corners and edges from damage.

I used images I photographed at previous Civil War events at ACFL&MH.

The main image, “Shooting”, is a sepia treatment of one of my favorites. The time of year is April, just before any leaves appear on the trees. The Library & Music Hall is on a hill above Carnegie with lots of light, and even in color the spareness of the bare trees, the stark light, the worn grass and the lack of structures in the background feels authentic. The 9th Pennsylvania Reserves were in a drill formation and I ran around among the trees trying to get dramatic shots without distracting them—and glad they were shooting blanks! For this one, I laid flat on my stomach a distance away and took several shots trying to get the fresh cloud of smoke before it dissipated.

The other shots are a mix of candids, posed and detail shots from previous years. I left these in color to distinguish them from the main image and also to note that these are present-day features visitors will see when they visit the event.

The top is three reenactors from the 9th Pennsylvania Reserves just resting after a skirmish the year the event was in early May, a misty muddy day also full of the character of a camp. The second is our Library Director, a Civil War historian and author, in period dress and headpiece. The next is the altar in the Capt. Thos. Espy Post, the wooden table in the center of the room with the folded American flag, the organization’s Bible and one lone hat from a soldier of the Grand Army of the Republic, the GAR. At the bottom, our Lincoln reenactor addresses his troops, the corps commander to the left, and the corps sharpshooter to the right, noted by the tail of the white-tailed deer on his hat; yes, it really used to be that people knew what you did by seeing the hat you wore. 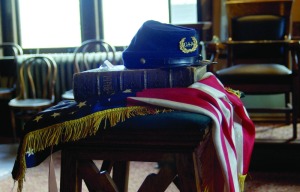 I used a font called “Aquiline”, one of the several antique quill-pen styles I’ve found that has a authentic feel, not just for the style of lettering at the time, but also for real handwriting. I have written with a quill pen in the 19th-century copperplate style as well as other types of calligraphy and lettering, so I look for the little quirks a human hand would leave behind in natural handwriting. I debated the use of this font as period fonts can seem cliché and even cute in design, but after trying several others I came back to this one. 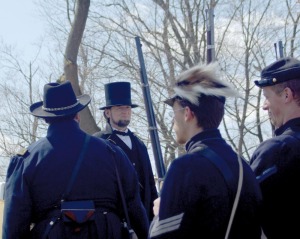 There’s not as much opportunity for design on the back since it’s text-heavy and needs room for the mailing area. Still, since these post cards are full color on both sides, an image of the Espy Post, taken by one of the members back in 1911, also shows visitors what they’ll see in the restored room, cleaned and repaired but otherwise exactly as the Civil War veterans of the GAR left it decades ago when the last member died. 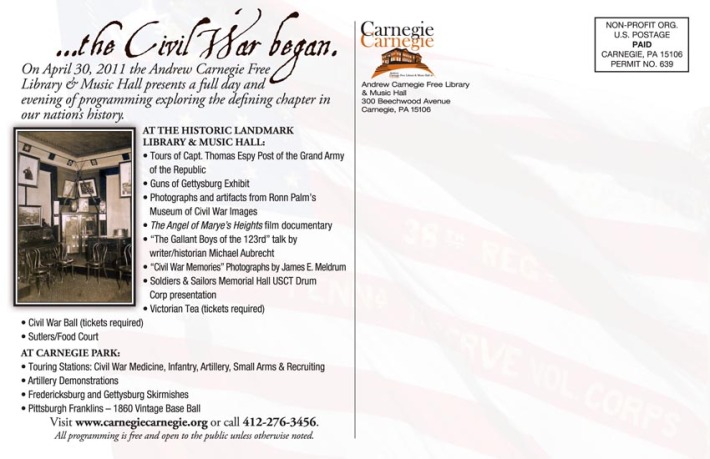 And just the hint of an image screened in the background, the corps flag of the 9th Pennsylvania transparent enough that it won’t interfere with mailing information, just enough to add appropriate colors to the back.

For more information on the event, please visit www.carnegiecarnegie.org; scroll down to see the front image from the post card and find the links to the schedules and the press release, plus links to other places on the site.

I usually photograph the event, and this year I’m planning something a little extra—I’m planning to make pretty things for lady reenactors, shawls, gloves, hats and more, and also sketch and paint a few images of past reenactment events. I’ve already gotten a start on that!