Of Harps and Fig Leaves, an Exhibit of Photographs 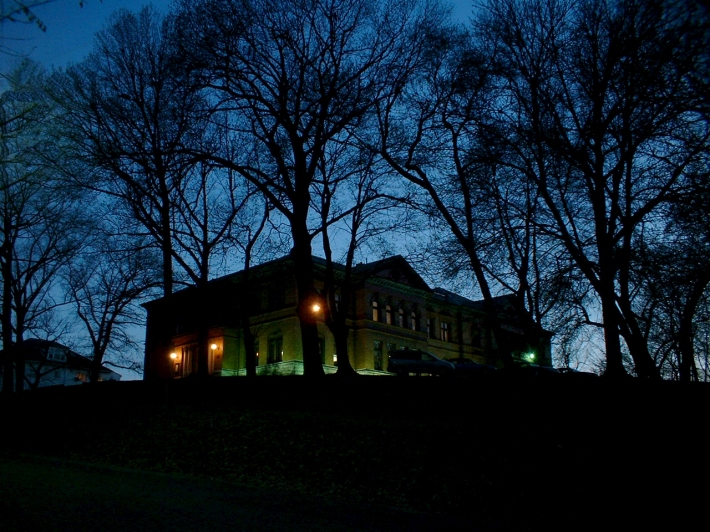 This exhibit of sixteen of my color photographs of Andrew Carnegie Free Library & Music Hall includes a variety of views, from grand and distant to detailed and intimate. The exhibit opened for the 2010 benefit event on October 2, Marianne Cornetti Returns, and will hang in the Reception Hall as a permanent exhibit between other shows and exhibits. The Reception Hall is open during regular hours; please visit www.carnegiecarnegie.org for more information and directions. I have also included a list of the included images, below, with a link to a brief slideshow of the images.

The genesis of the show

The Reception Hall decorated for the annual benefit.

When I bought my first camera, a Pentax K-1000, one of my first subjects was Andrew Carnegie Free Library & Music Hall. I lived two doors down, I was practicing with black and white film, and the massive, elegant building surrounded by tall trees was a feast for my eyes.

I’ve been visiting this place for books since before I can remember, but even today looking at the shelves of books interspersed with the tall Corinthian-topped pillars I can still remember feeling very small standing in the quiet of the big room and thinking it was the grandest place that could ever exist.

As an adult, when I began to return again for books, I also began wandering into as many rooms as I could gain access to, enjoying what is now the Reception Hall on a sunny winter afternoon, peeking into the darkness of the Music Hall, imagining myself on the stage.

As renovations began and I was spending more and more time here, all the memories combined with all the activity and inspired an exploration of the space recorded in photos using my new Pentax camera a digital SLR K10D.

The photos include “The Jewel on the Hill” shown above, one we’ve used repeatedly as the signature image for the facility. Each photo has a story of its own genesis, but this one in particular was a real stroke of luck and timing. I was walking home on a clear, warm spring dusk in late April, 2005, April 24 to be exact, and arrived at the bottom of Library Hill at just this moment. The sky was fading from brilliant turquoise to cobalt, the still-bare trees were etched against it in silhouette, and the grand building itself stood partially lit by the sunset but with all interior and exterior lights on, solid and stately, serving its public in its 104th year. By the time I had snapped a half dozen or so shots the light had changed completely and the moment was gone. That was part of the timing, the other part that they had only temporarily installed the foundation lighting but never used it again,a nd this was part of what gave the building that lovely definition against the dark hilltop. A few minutes earlier or later, the previous or following week, and this photo would never have existed. And it was taken with my first little point-and-shoot 2MP digital camera, I don’t know how it came out as clearly as it did!

Here is a list of the names of the photos in the show, and you can view a quick little slideshow of them here. But you’ll have to visit the Reception Hall to really see them and know the rest of the stories.

Each image is 11″ x 14″ matted with a plain white mat in a 16″ x 20″ matte-finish black frame. The photos are for sale at $75.00 each, and a portion of every sale supports the Andrew Carnegie Free Library & Music Hall. You can purchase them directly through the Library & Music Hall or contact me with your interest.