At long last, the system is in place. Abandoned mine drainage at the rate of 2,000 gallons per minute issuing from a mine on the Wingfield Pines property flows into the system at the left, flows out of water jets by water pressure into the large first pond, then flows by gravity from that pond through the four pie-slice ponds in the circle next at a rate which allows almost all of the iron oxide in the water to precipitate out and stay behind. It then flows through the wetland area where any heavy metals left in the water are precipitated out and the water gets its final natural cleansing before it flows out into Chartiers Creek, thus eliminating 43 tons of iron oxide from the creek each year.

We created the first brochure for this innovative abandoned mine treatment system five years ago when it had been designed and was entering the approval and funding stages.

Now, five years later, the system has been built and is working as intended, so it was time for an update. Through the years, so much has been written by ALT about this system, so the copy came from everywhere, then whittled down to just what was necessary for the public to read and create interest. We’re also working on other materials and signage as interpretive information for this system, so we don’t need to tell the whole story in one small brochure.

In that time I’ve gone from QuarkXpress as my primary design program complemented by effects in PhotoShop and Illustrator. Today I’m using InDesign CS3 and can do many of the effects I had once laboriously produced in PhotoShop right in the program, easily editable when copy changes and photos move.

The 90% black overlay is an InDesign effect, and I used it rather than cropping the photo or masking it off with a color because the slight hint of pattern in the dark area is just a little more appealing to the eye than a simple flat area that size. Also, it’s an aerial photo, and cropping it down to just the necessary image loses the appeal of an aerial photo in looking at the countryside from a perspective you never get to see. I also used the overlay technique in the center panel on the outside, but it’s done a little differently. I converted to grayscale a photo of one of Wingfield Pines’ ponds in the rain with water droplet circles on the surface of water and Wingfield the Frog, then making it dark green in the program and finally filling the art box with 80% dark green.

The curved type is created in InDesign as well, though Quark could always do that too. The iron oxide rust to clear water blue gradation in the letters, though, was a great element to be able to create directly in InDesign. I used to create those elements in PhotoShop and editing was such a pain that I just quit doing cool things for a while.

In this brochure, only one photo is one of mine, and it’s the background photo in the outside center panel all in green.

Just out of interest, here are the inside and outside spreads of the original brochure. You’ll see many elements in common, such as colors and logo placement, feathered-edge photos and fonts. In this brochure, all the photos are mine as well as the circular illustration on the outside back panel that looks like a digestive system. Really, it kind of is a digestive system because of the way the system works. 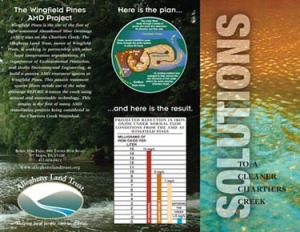 In this brochure, the only special effect is the 50% opacity on the word “Solutions” on the cover and the faded outer shadow behind it. Those were the days.

I’ll be posting this on my regular website soon, but you can also see more materials I’ve designed for Allegheny Land Trust on their page on my website.

In addition to this, I’ve recently completed their spring newsletter, and we’re working on interpretive signs for this system and other features of the Wingfield Pines property.